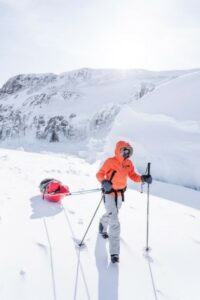 England’s polar ski explorer and endurance athlete  Caroline Côté has a deep love for icy places and educating the world about their importance to the planet.

In November she attempts to become the fastest woman to reach the South Pole on skis, all 1130 km across Antarctica.

Her goal is to break Johanna Davidsson’s 38-day record by two clear days.

The expedition will begin at Hercules Inlet with Caroline traveling seven to ten hours daily fighting winds, snow and whiteouts in temperatures from  -25  to -40 degrees Celsius.

Fewer than ten women have reached the South Pole solo on a ski mission.  A test of fitness, stamina, determination and mental strength and her most import challenge yet.

Caroline said : ”I have completed several expeditions in unexplored, uninhabitable places, including a North Atlantic Ocean sailboat crossing, several Antarctic expeditions, and a fully autonomous trek for 63 days through the Svalbard archipelago.

Return of the Royal collections